Slot machine Bombs Away from Habanero - a godsend for those who like military themes, vintage and girls pin-up. The slot recreates the aesthetics of the mid-twentieth century. The reels are set against a background of bomber planes. Images of military equipment are used as symbols. The manufacturer has worked not only on the plot and design but also on the slot machine's features. During the game, some cells will be blown up, so the outcome of the round can never be predicted!

Bombs Away can be played for free if you run a demo version of the slot at Golden Star online casino. This is an identical game, which is that all bets are made in conventional currency. There is no risk of losing, just like there is no need to register a personal account on the entertainment portal. In order to win real money in the slot machines, you have to play for money, which means you have to create an account and make a deposit. 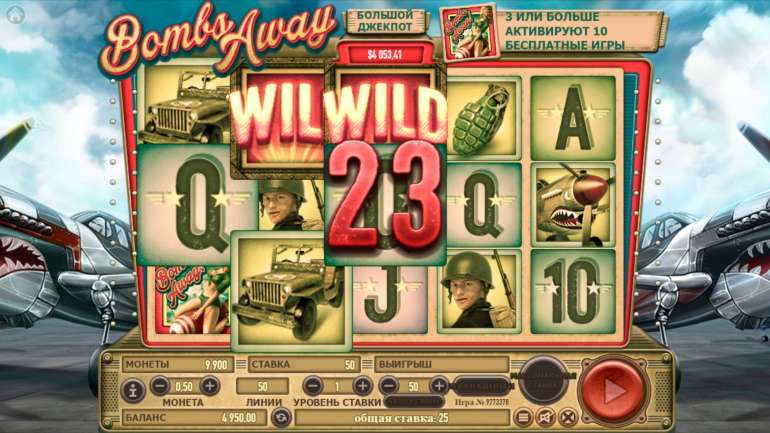 Habanero products are modern software, so this emulator has a user-friendly interface and attractive graphics. Undoubtedly, the popularity of the slot machine and related to the fascinating gameplay. The user's main task - to get a combination of a number of identical characters on any of the 50 active lines by default. To start, the player sets the bet, after which he activates the spinning of the reels. The outcome of the round becomes known at the moment when the spins are stopped. The outcome is always unpredictable - a random number generator is responsible for this. Bombs Away - license machine, so the integrity of the gameplay is ensured.

If the screen is formed a successful sequence - credited payment, and then starts a new round.

During the game, a wild substitute appears on the reels (the Wild sign). This is the highest paying sign - for 5 repetitions, the user expects a multiplier of x500. It appears during spins or from the explosion of a rocket that falls from a passing bomber. It completes all combinations, except those involving a scatter (the girl on the rocket). The scatter pays 3, 10 and 50 initial bets wherever it is located. On a roll of 3 girls on a rocket at the same time, free spins start at the previous bet in the regular round. The mini round is not re-activated.

The Bombs Away slot machine is one of the most popular games at Golden Star Casino! Play it and see for yourself.