Who Wants to Be a Millionaire slot machine

Big Time Gaming has brought to the attention of fans of Golden Star Casino and unconventional slot machine Who wants to be a Millionaire. This slot machine is based on the popular UK global entertainment show in 1998.

Who wants to be a Millionaire slot machine with six reels, which have four additional fields. Each spin changes the number of possible combinations to 117649. The developer used the patented Megaways feature, which involves paying out so many combinations. This is not the first time the company wants to create original online slots.

Who wants to be a Millionaire – is a new machine that has quickly gained popularity in many countries and lets you play for free or for money. The slot is available in the best online casinos for free or for the money game, which allows you to earn more.

How to play a slot Who wants to be a Millionaire?

Standard slot machines allow the player to collect some combinations on the active lines. The prize chain that the symbols make up explodes, making room for new images. 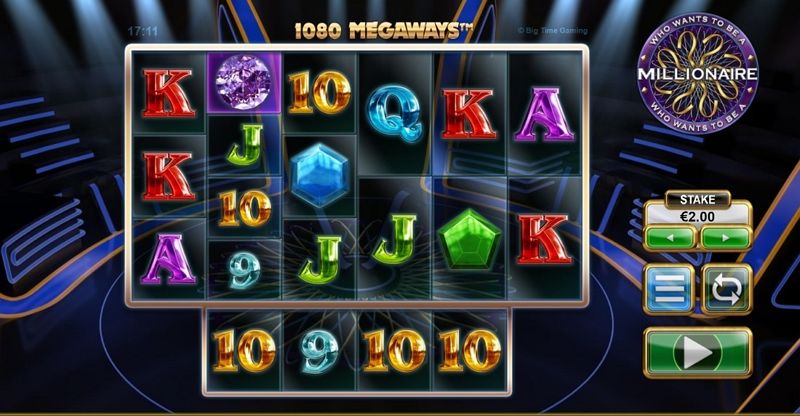 Three or more of the same symbols form winning combinations and bring winnings according to the odds table. The symbols that make up the winning combination are replaced by other pictures when they explode. The winnings are calculated by multiplying the odds on the combination by the bet made on that line. The minimum bet in the game is 0.2 coins, and the maximum bet is 100 coins. The maximum winnings on the machine for 6 identical pictures equal the sum of the bet multiplied by 50.

The symbols in Who Wants to Be a Millionaire slot machine

The basic symbols have become playing cards (their face value) and images of all kinds of precious stones.

Among the special symbols present:

Wild — replaces other symbols, appearing only on the extra tiles. The only thing is that it cannot replace Scatter only.

Scatter — is also present in most games offered by many casinos. He is responsible for starting the prize game, which takes place in several stages.

Bonuses in Who wants to be a Millionaire

The software provider that produces only licensed games has also made provision for receiving nice bonuses. The bonus game is only possible after the appearance of three or more Scatter symbols on the playing field. The 8 free spins that the user receives at the beginning of the process can be increased several times by playing the risk game. It is a multi-level mode in which you have to choose your answers from the options presented. There are even hints, like in Who wants to be a Millionaire. You can stop the freespin increase at any of the levels. A maximum of 50 free spins will be awarded to the one who reaches the last round of the risk game. The decision to continue the risky game is up to the gamer. Freespins can be picked up by pressing the "WALK AWAY" button.