Software from Net Entertainment has always been known for the highest paying slot machines. The Flowers game: Christmas Edition, was no exception. The average percentage return in this slot 96.3%. This slot has 5 reels. Combinations are counted on 30 pay lines. Pictures are placed on the screen in 3 rows of 5. At each position, bets are made up to 5 coins worth 0.01 to 0.50€. One spin costs between thirty cents and 75€. The coin value is set under "Coin value", and the number of coins is set under "Level". There is an "Autoplay" mode in which the reels spin automatically for the selected number of times. The risk round is not provided. At the end of each spin of the reels, all the money earned, go to the player's account. 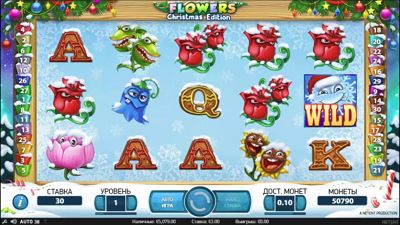 In this game, there are single flower, gingerbread and card elements, double Flowers symbols, as well as symbols with additional options and payout-enhancing free spins.

The double Flowers symbols — create more lines to win, as each picture counts as a separate element.

The base symbols win when a continuous string of identical symbols is placed on an active pay line. The payout is calculated by multiplying the stake of a particular position by the set coefficient of the dropped combination, it ranges from x5 to x5000.

Special features are included in the original Wild and Free Spin symbols:

The wild symbol — is depicted as a snowflake and is the highest paying symbol in the Flowers Christmas Edition slot machine. The Wild is able to replace all other symbols, creating winning combinations.

Free Spin — symbol that triggers the bonus round. This can be a single or double symbol. It requires 4 or more of these symbols to activate. The player is awarded 10 free spins, and winnings are increased by 3 times.

Software provider Net Entertainment creates modern licensed slot machines. Among the many games and the new modern Christmas slot Flowers Christmas Edition Touch (Flowers: Christmas Edition). This version of the game will captivate and intrigue even experienced players and connoisseurs of quality slot machines. Players can play without registering for free in the demo version and bet for money at any virtual casino on their computer, tablet or mobile device.